Inspirational Bedroom Designs; Which is Your Favorite?

We hope that everyone had a great Christmas Holiday.  It has been a busy one around here! Now we have entered the time where we are all suffering from post holiday guilt; mainly from eating one too many pieces of fudge, and visiting the dessert table one too many times.  Thankfully the new year is right around the corner and we can again make a resolution to exercise more and eat healthier foods; just like last year right??

Today we find ourselves indoors, far away from post holiday shopping.  We aren't the only ones, as a blizzard is currently taking place just outside our window here in Indiana.  I am sure the local merchants are disappointed, but for us it makes for a perfect day of slowing things down, and enjoying time with each other.

It was also one of those mornings where you just didn't want to get out of bed.  In honor of staying longer in bed, we have decided to show some of our favorite, cozy bedroom spaces.

Which one makes you want to sleep in a little longer?


CHOICE 1
Love the blue used in this bedroom.  The canopy over the headboard really gives the room height.  Also love the little secretary in the corner as we have one that is very similar.﻿ 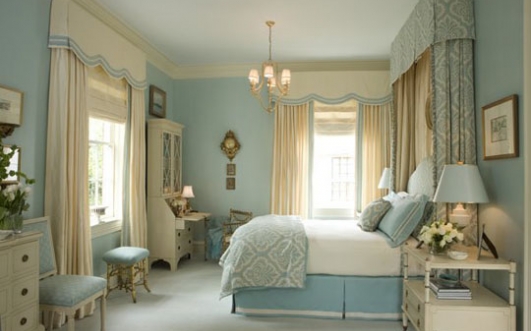 Source﻿
CHOICE 2
I know this picture has been floating around for a few years, but we still love it! The entire space has a rustic french style, from the beams to the arched french doors.  If I am correct, this has some hints of a Jack Arnold designed home.﻿ 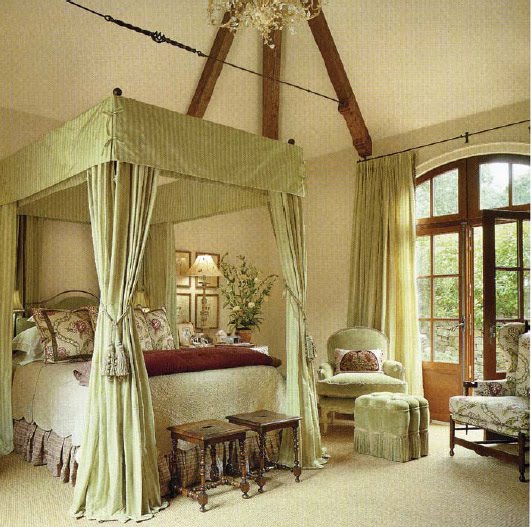 ﻿
Source
CHOICE 3
Another elegant bedroom with what appears to be a matching baby bed also under a canopy.﻿ 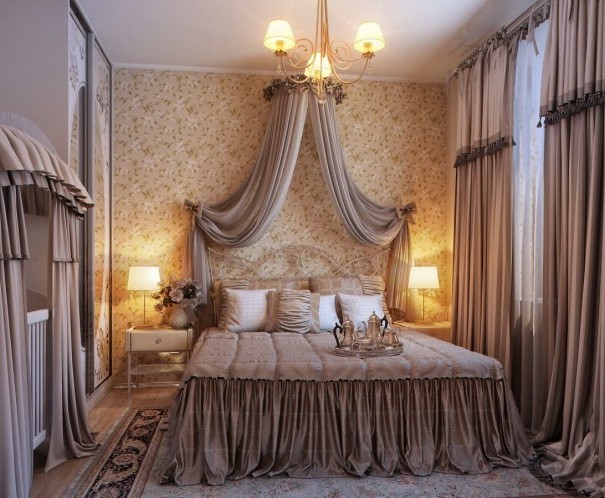 Source
CHOICE 4
Love the dimensions of this bedroom and sitting room.  Again we love the blue color used on the wall and some of the fabrics.  If I had a sitting room this large I may never leave my bedroom!﻿
L 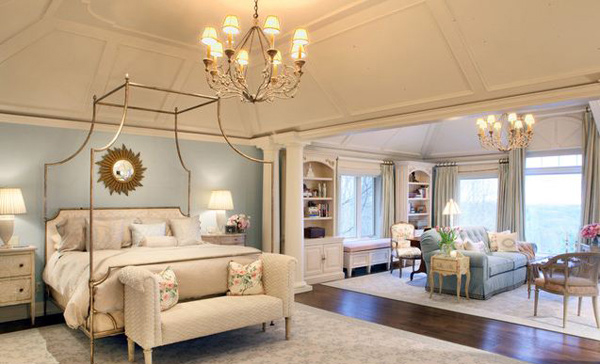 Source
CHOICE 6
Who wouldn't want to wake up next to this roaring fire? With a blizzard outside, this may have been as far as I made it today.﻿ 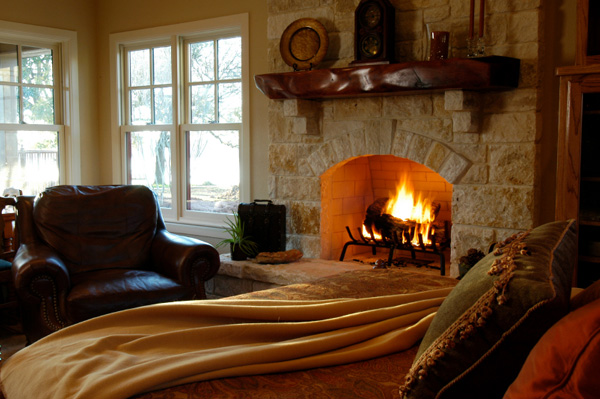 Source
CHOICE 7
Maybe it is just us, but we never seem to get our beds to appear as cozy and fluffy as the photographs.  Would love to spend all day rolled up in this bed. Love the molding detail along with the often seen French yellow and blue color combinations.﻿ 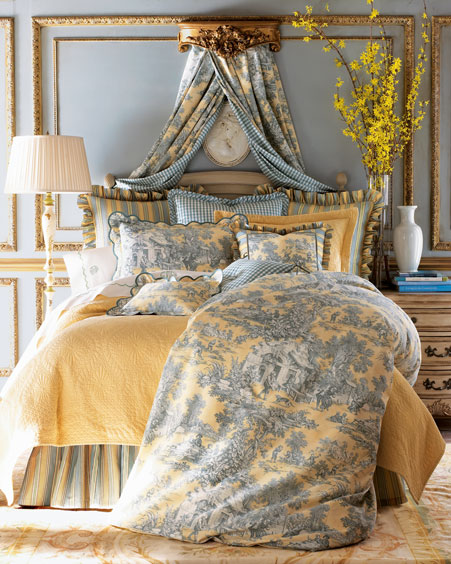 This is one shot of our current master bedroom.  At the new house we intend to use this set in our guest bedroom, and go with something similar to the first photograph in our new master.  This duvet and bench were great Pottery Barn finds! 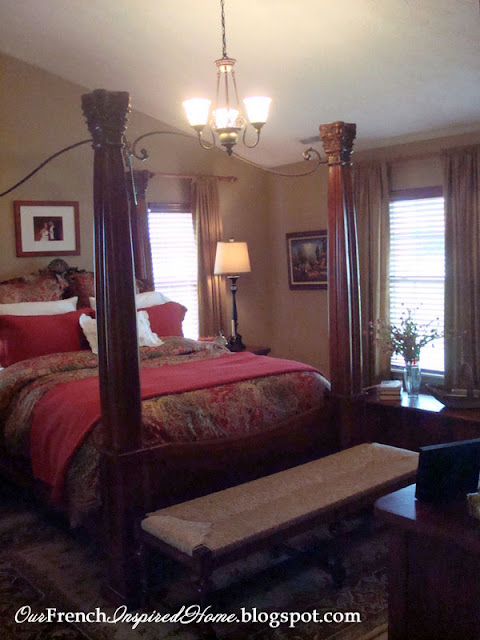 Now that some of the holiday craziness is over we plan to return to house planning.  January is the final push to get all of the bids and estimates completed.  Depending on the circumstances, we could be sharing construction posts within the next few months.

Wishing everyone a safe day!

Posted by Our French Inspired Home at 3:25 PM 10 comments:

We thought we would stray away from house updates during the holidays because we ourselves are taking a little break.  The holidays are busy enough without having to meet with contractors.

We anticipate that this past weekend was a busy "baking weekend" for many of you.  It was no different at our house.  One project that we tackled was the yearly gingerbread house. 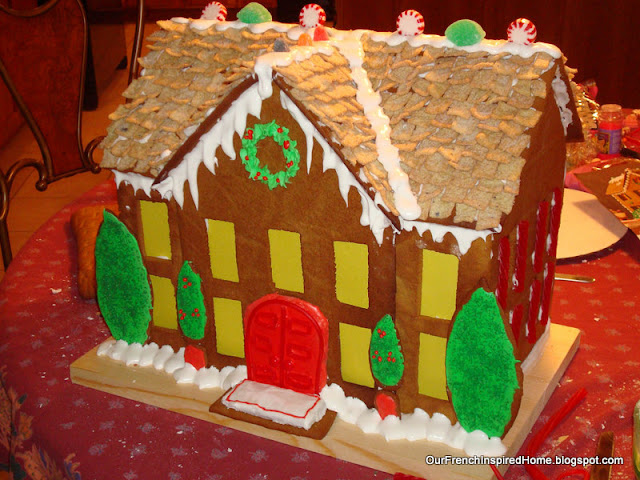 The first time we made this gingerbread house was in 2008.  We got our inspiration from the Williams Sonoma Gingerbread House. 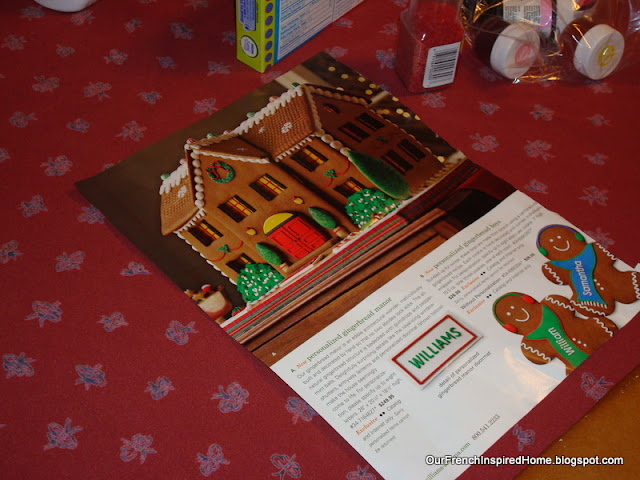 The first step was to make a pattern out of cardboard, and then trace that pattern onto our homemade gingerbread.  We made enough for two houses and had some friends over to share in the fun.  From start to finish it took about six hours to make all of the gingerbread.  Now it is time to assemble! 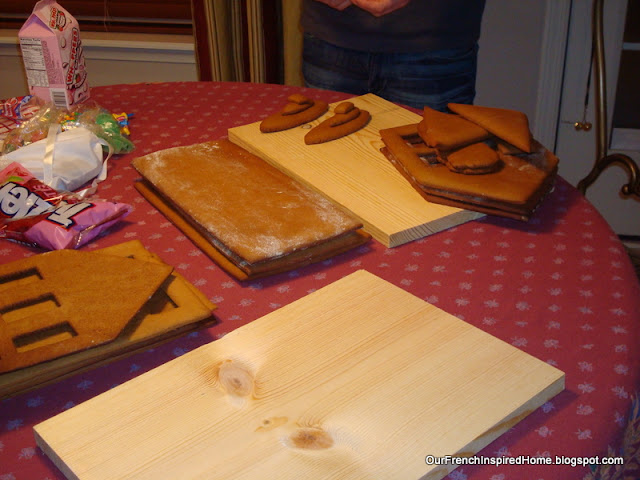 Since there were no instructions we just had to go for it.  We used royal icing as the glue for the entire gingerbread house.﻿ 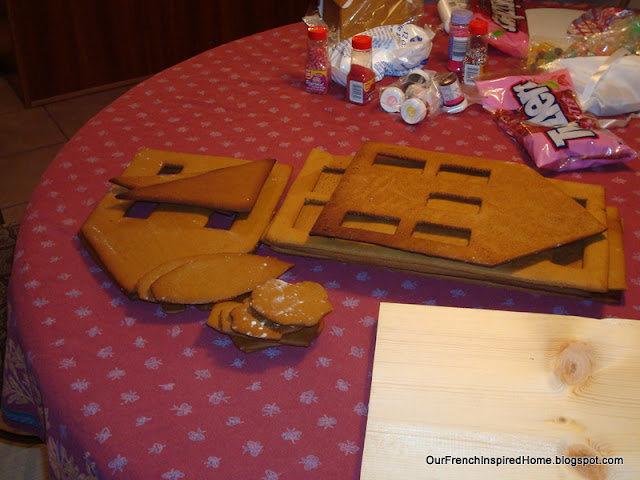 It was also handy to have a soup can or two on hand to help hold up the walls as they set. 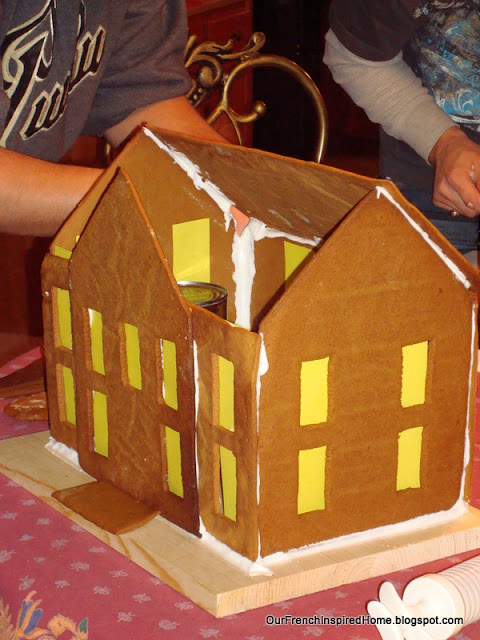 Now that is starting to look like a house!  For the windows we used yellow construction paper.  Next time I think we will draw some window grids on the paper. 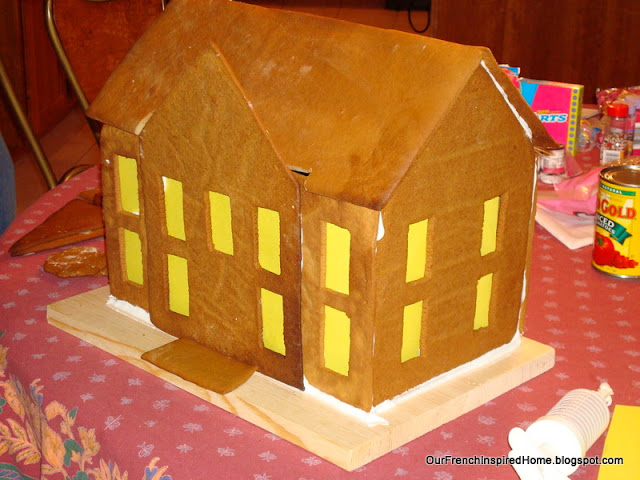 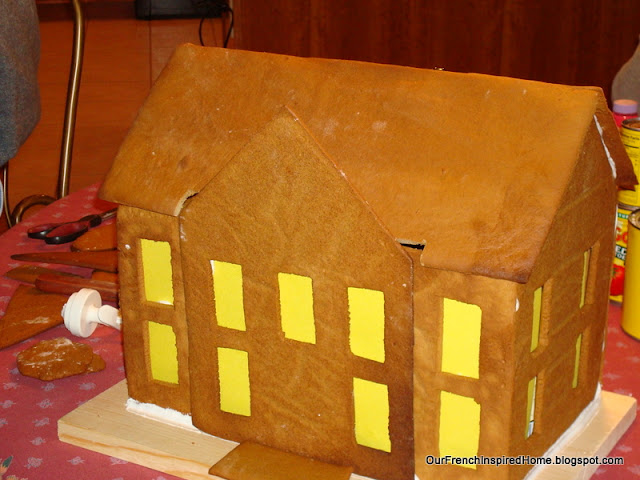 We used cereal for roof tiles.  This particular cereal was called "muffin tops" and was quite good!  They actually taste like little blueberry muffins.  We made some quick window shutters out of candy since our piping skills are not up to Martha Stewart standards.﻿ 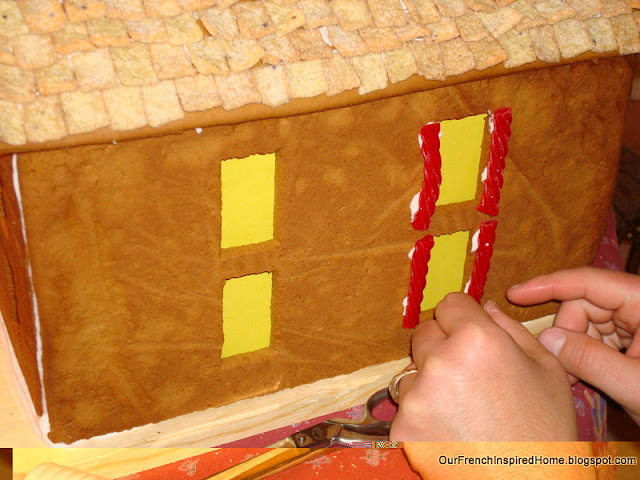 The roof is starting to take shape. We are now about two hours into the assembly process.﻿ 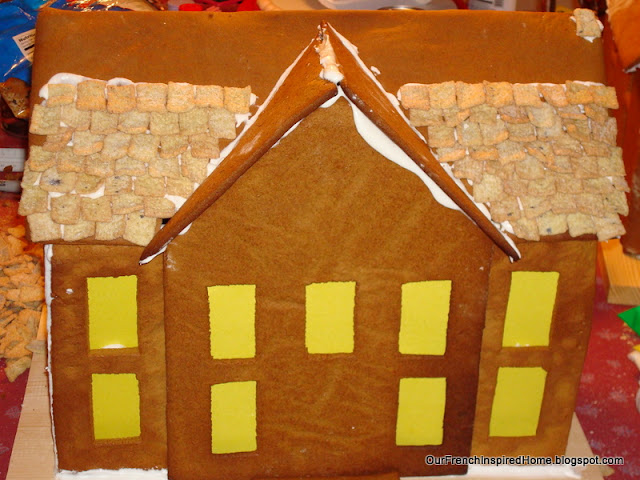 Slowly we add the roof tiles one by one.  This is when we start to think that the house is too big.﻿ 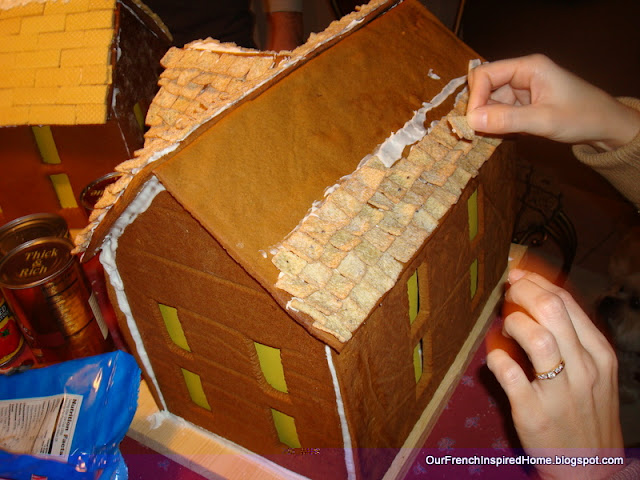 The roof is done and its time for landscaping.  We made a few bushes for the front and back of the gingerbread house, as well as some potted plants.  ﻿ 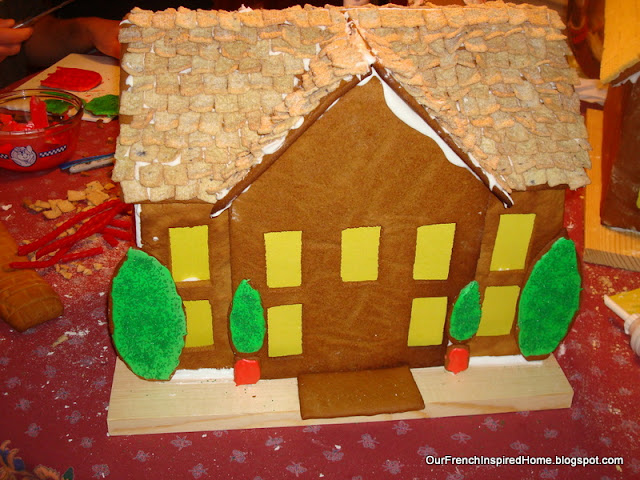 Now the house is ready for candy and icing.﻿ 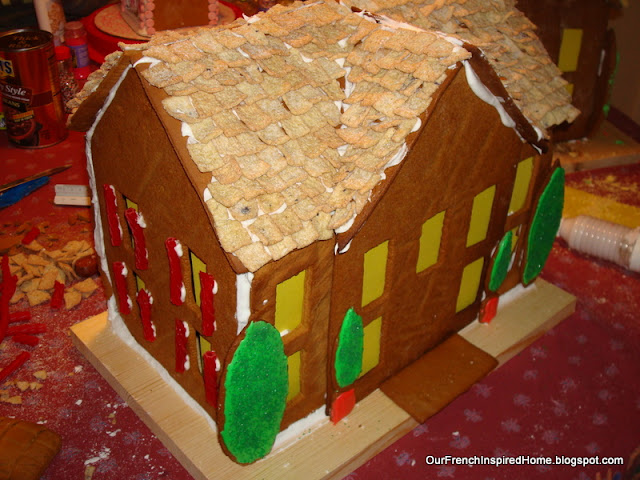 We added icing in the roof valley to give the appearance of snow. We also added ice cycles to add some character, but mostly to hide our errors.  Like I said, we are amateurs. 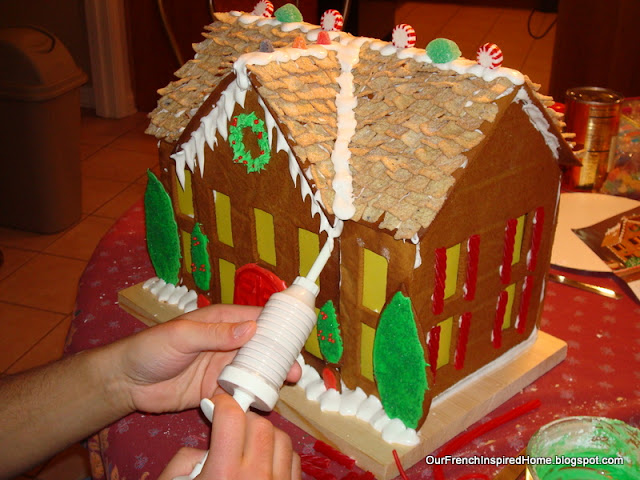 Complete!  We added some final touches with the red front door and welcome mat.

Again, we won't win any prizes from Martha Stewart, but I think this gingerbread house came out pretty darn close to our inspirational photograph.﻿ 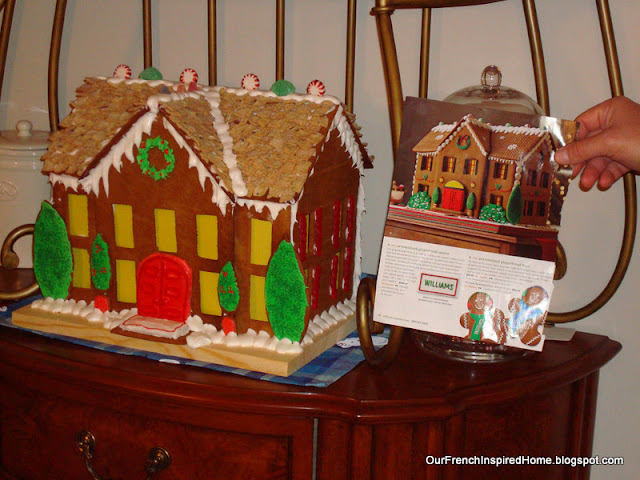 If going through the 12 hour process of baking and decorating your own gingerbread  house sounds like too much work, you can order one through the Williams Sonoma Catalog.
Wishing you success in all of your holiday baking!
Tonya and Rob
﻿
Posted by Our French Inspired Home at 10:10 AM 18 comments: 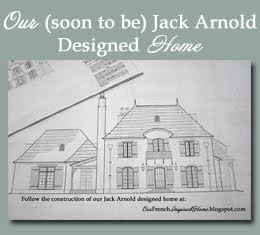